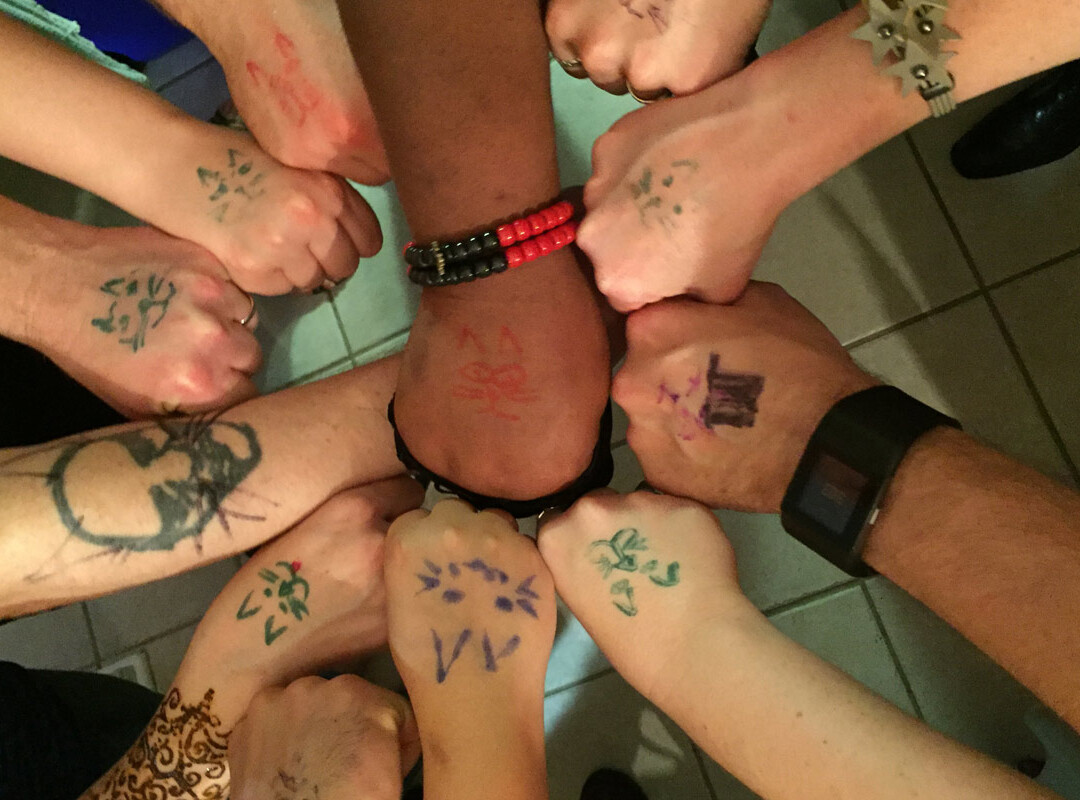 The tenth Ye Olde Yellow Cabaret just wrapped up and it was by far the biggest yet! 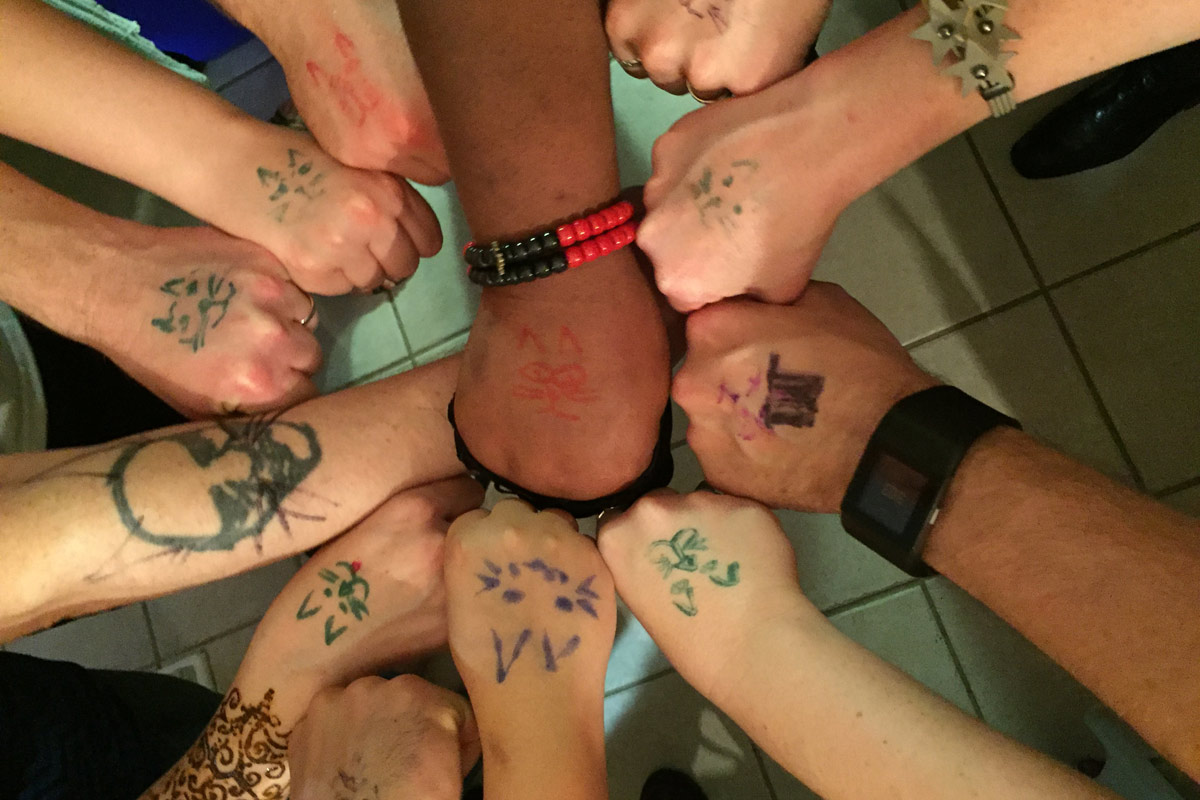 Another group of Hand Catted attendees

This event marked a change brought out by some layout changes at the Yellow Cab Tavern. The entry was in the parking lot and there is now a designated patio outside the back bay doors. As per tradition, all guests to the event were “becatted” by the Airship Passepartout door crew: Mike, Sabrina, Gintia & Bryan. Just over 200 people attended the first Yellow Cabaret of 2016 which had the theme of Fairies, Gypsies, Pixies & Friends! 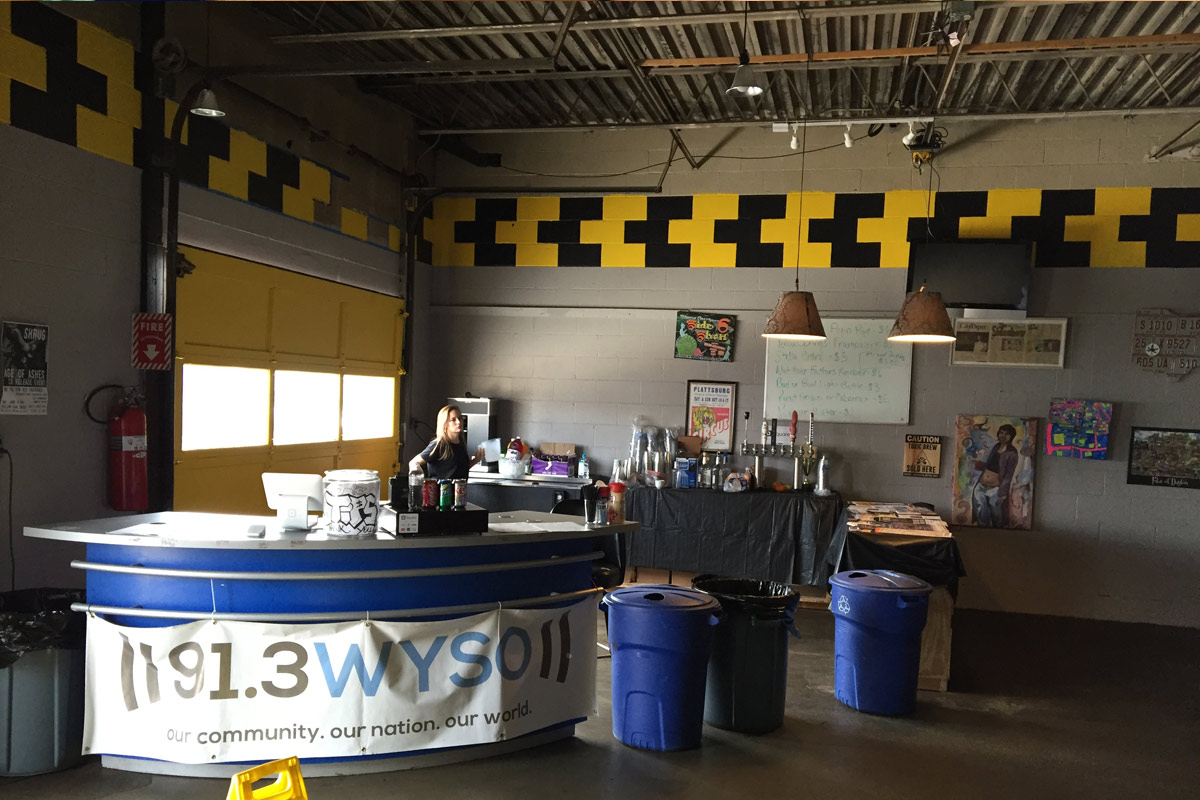 New Layout of the Yellow Cab Tavern Bar – Plus Tara!

This time there were three bartenders running the bar with four mixed drink selections created especially for the themed event (“Simply Ernest”, “A Certain Puckish Quality”, “Though She Be But Little, She Is Fierce” & “Ill Met By Moonlight”, plus red & white wine and a selection of beers on tap including several from local micro-breweries.

We had several great photographers in attendance who captured all of the amazing performances including: Rob Badger, Burch Roots Studio, Gene Lawson. See a full list of photo sets & videos at the bottom of the page. (Note: Unfortunately there were issues with the ceiling cam and nothing was recorded.) 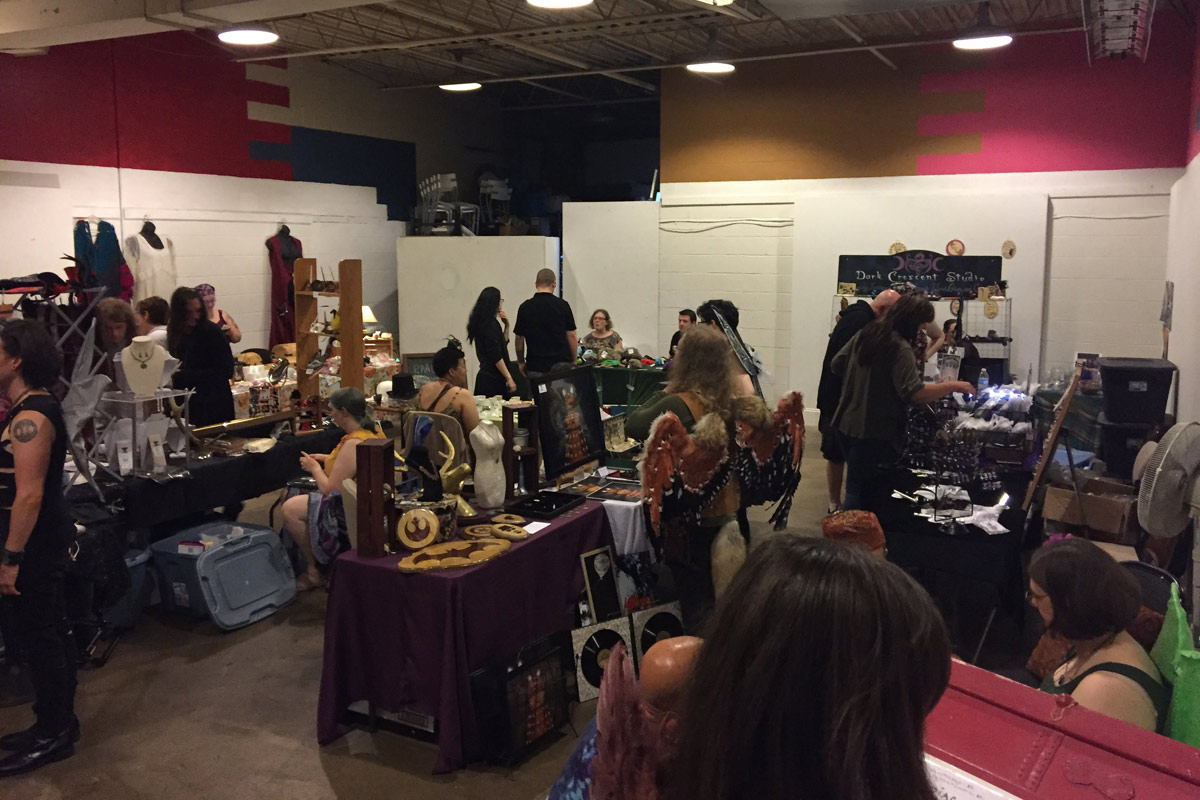 Some of the lovely Vendors! 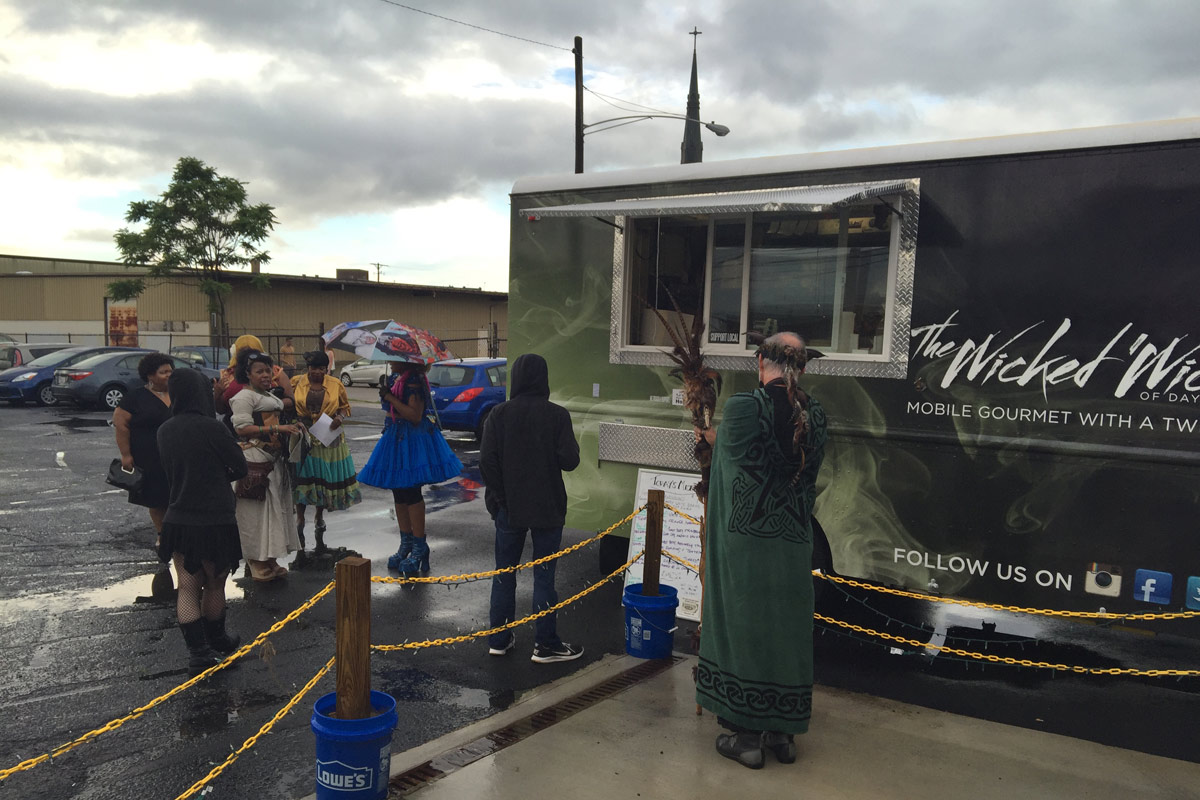 the Wicked ‘Wich of Dayton 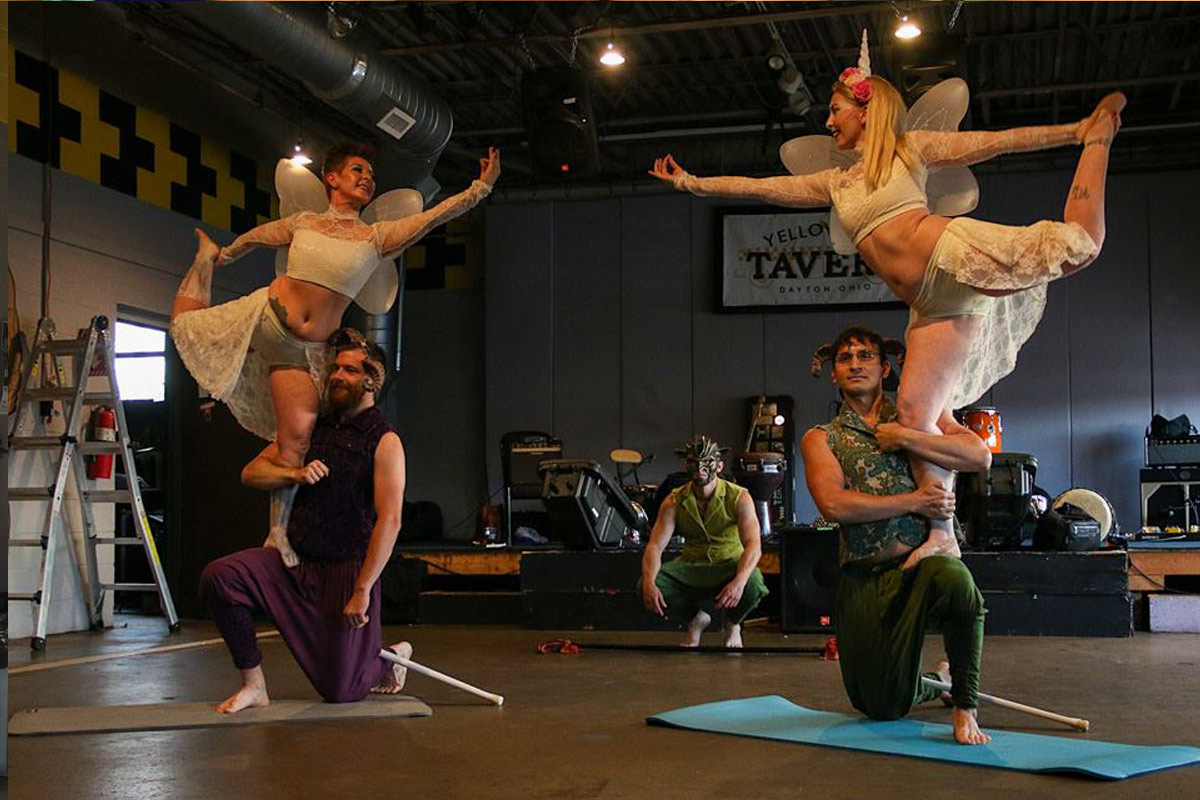 Cirque de la Lune & Cincinnati Pyro returned again to Yellow Cabaret with an amazing set based on A MidSummer Night’s Dream. Unfortunately due to the weather, they could not do any of their fire acts. So they improvised with LEDs and other tricks to keep their show intact. Their set itself was full of dance, acrobatics, flow arts and other surprises! 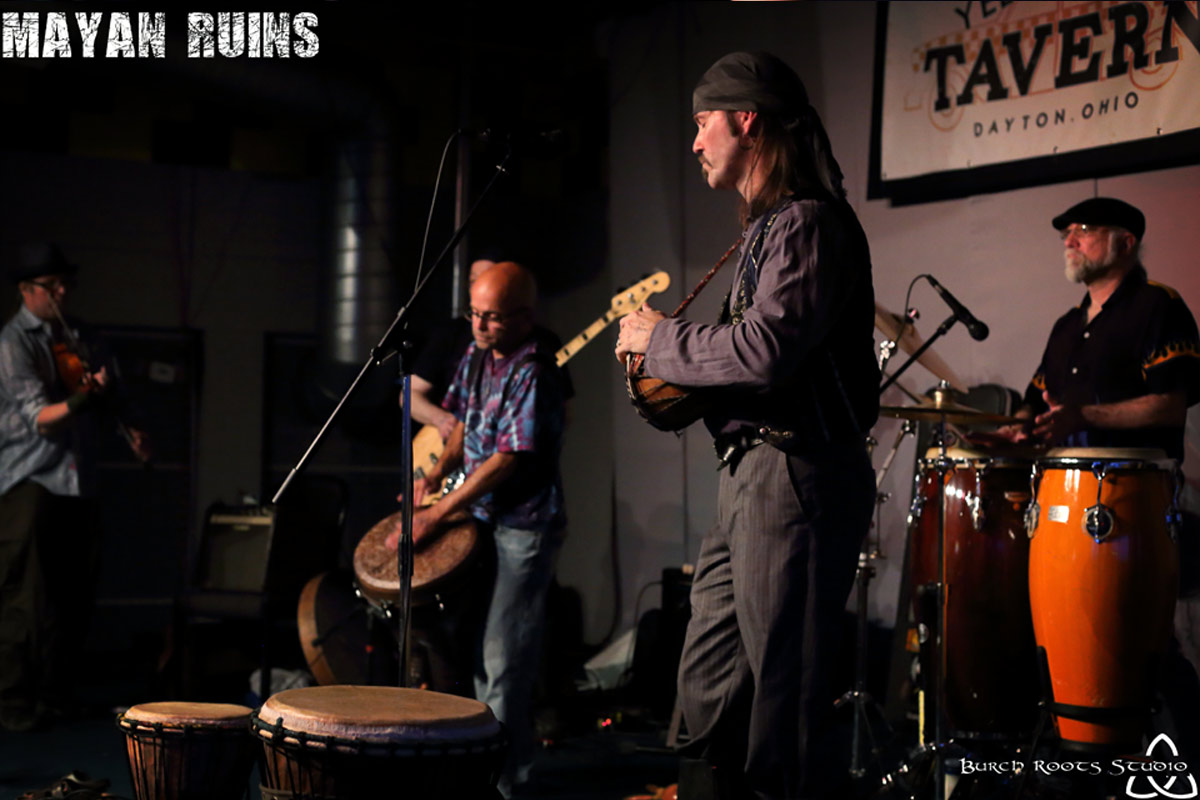 Mayan Ruins from Cincinnati made their first trip to Dayton and made quite an impression on the crowd. Their wonderful tribal / world beat music had the crowd dancing and fit beautifully into the event theme! 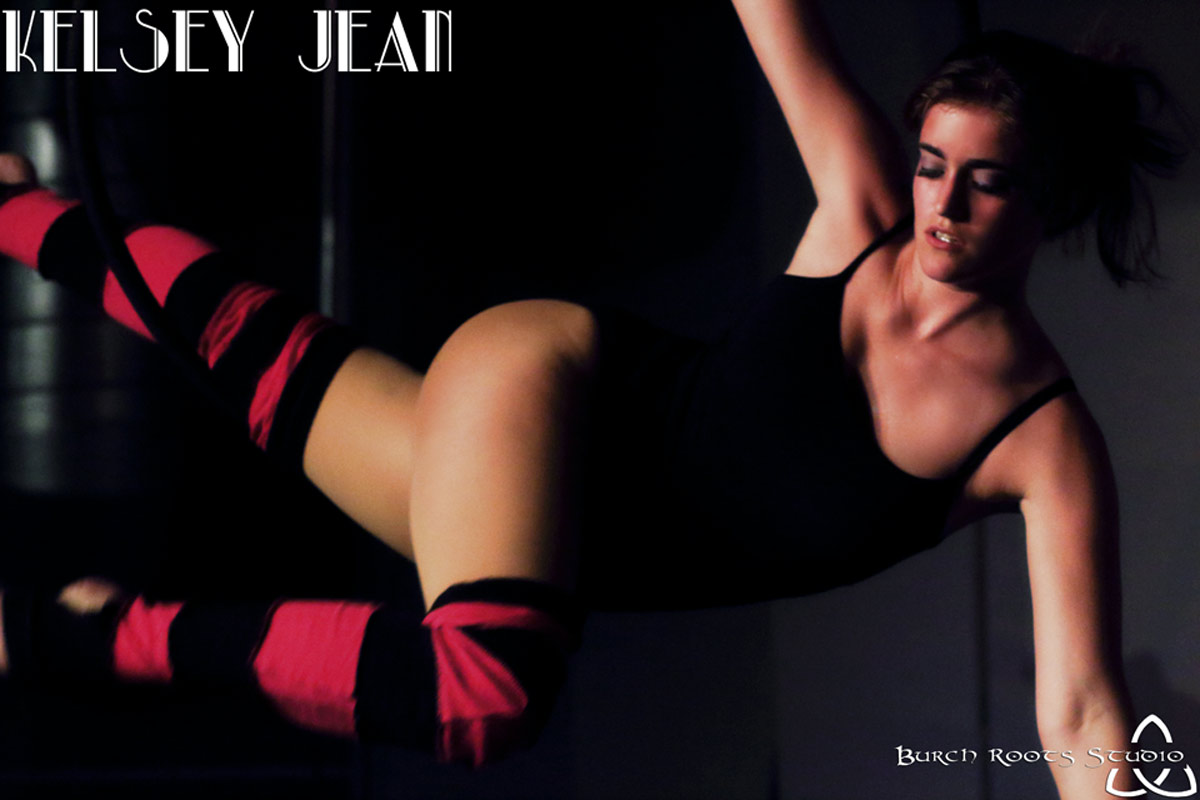 Kelsey Jean had her first solo performance at Yellow Cabaret featuring hooping and Lyre hoop. She entranced the crowd with her grace and skill. Her lyre hoop routine was especially mesmerizing

Troupe Roja became a band of gypsies as they belly danced their way through an extended set of their storyline based set. 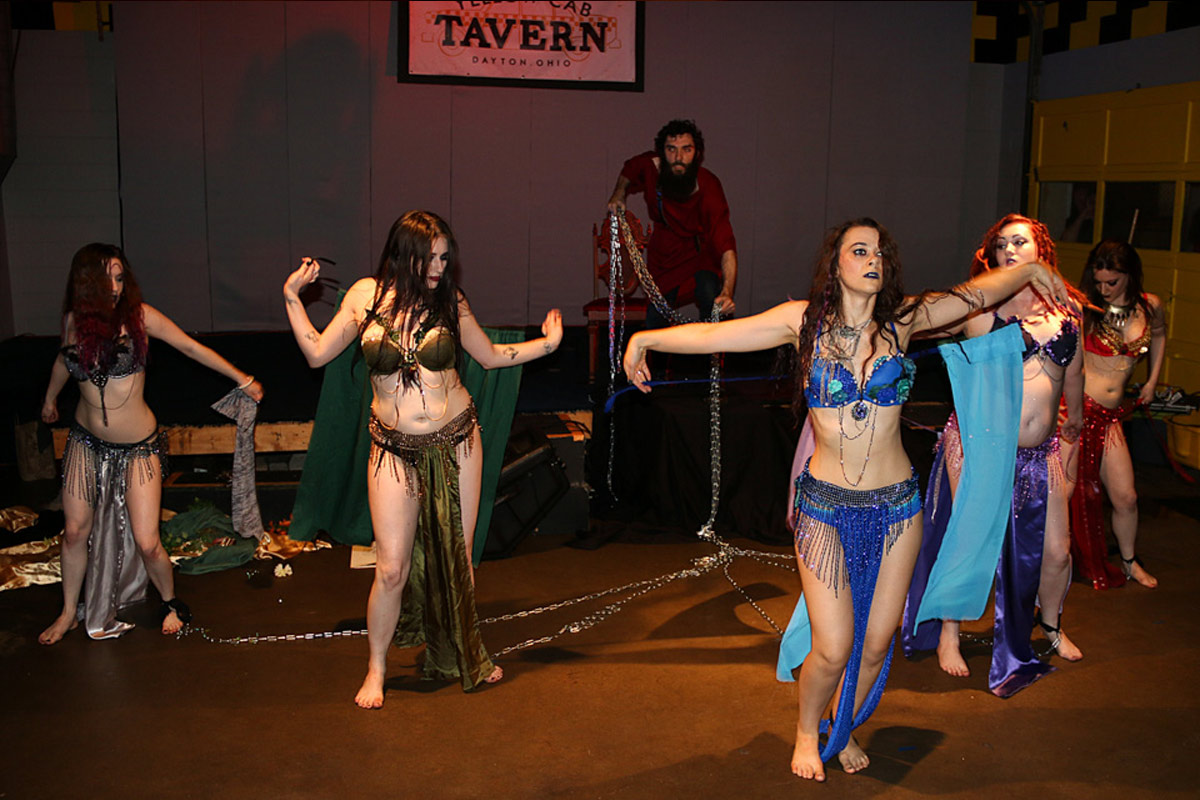 The lovely ladies of Troupe Hexa put on an amazing burlesque show consisting of four performances featuring different members of the troupe. Then as a finale that featured all five of these devastatingly gorgeous & talented women performing 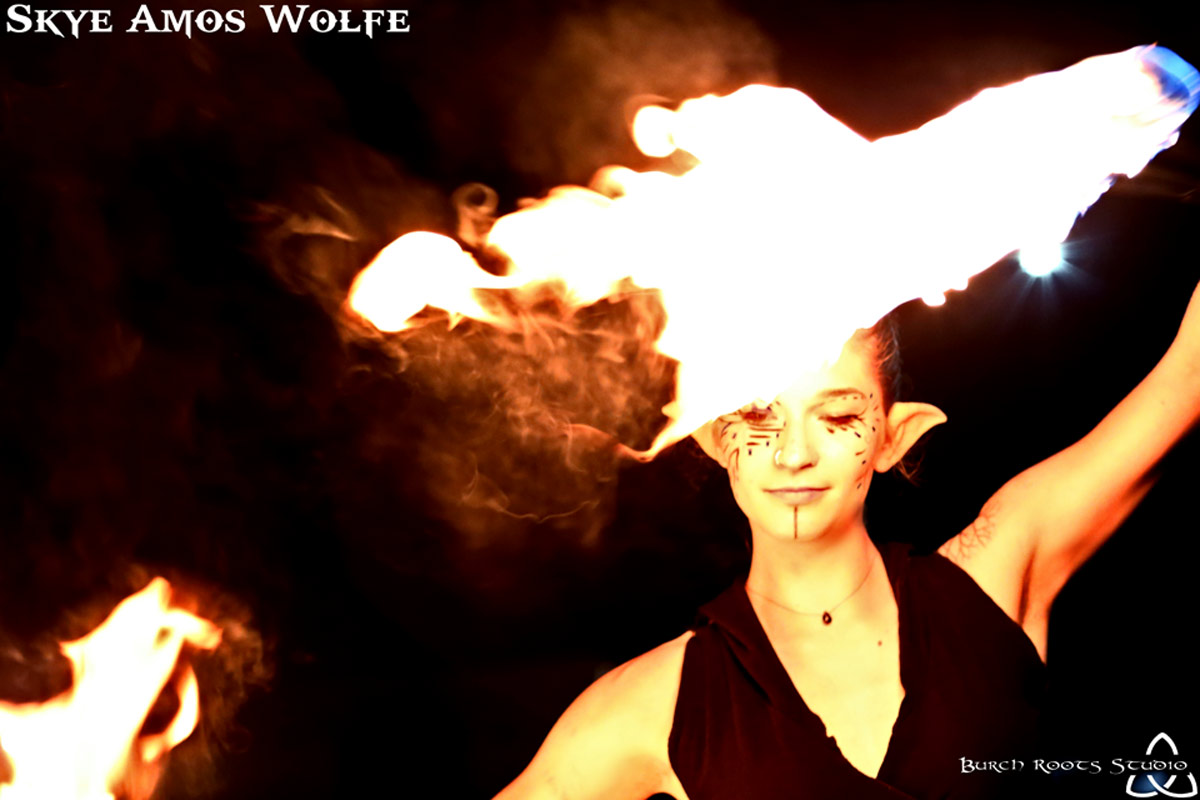 The sky had cleared of all rain and the weather was perfect for the talent and breathless beauty of Skye! The crowd was in awe watching her manipulate fire as she dances with it and even ate it. Even a police car parked at the lot next door and watched half of her set until they peeled off. 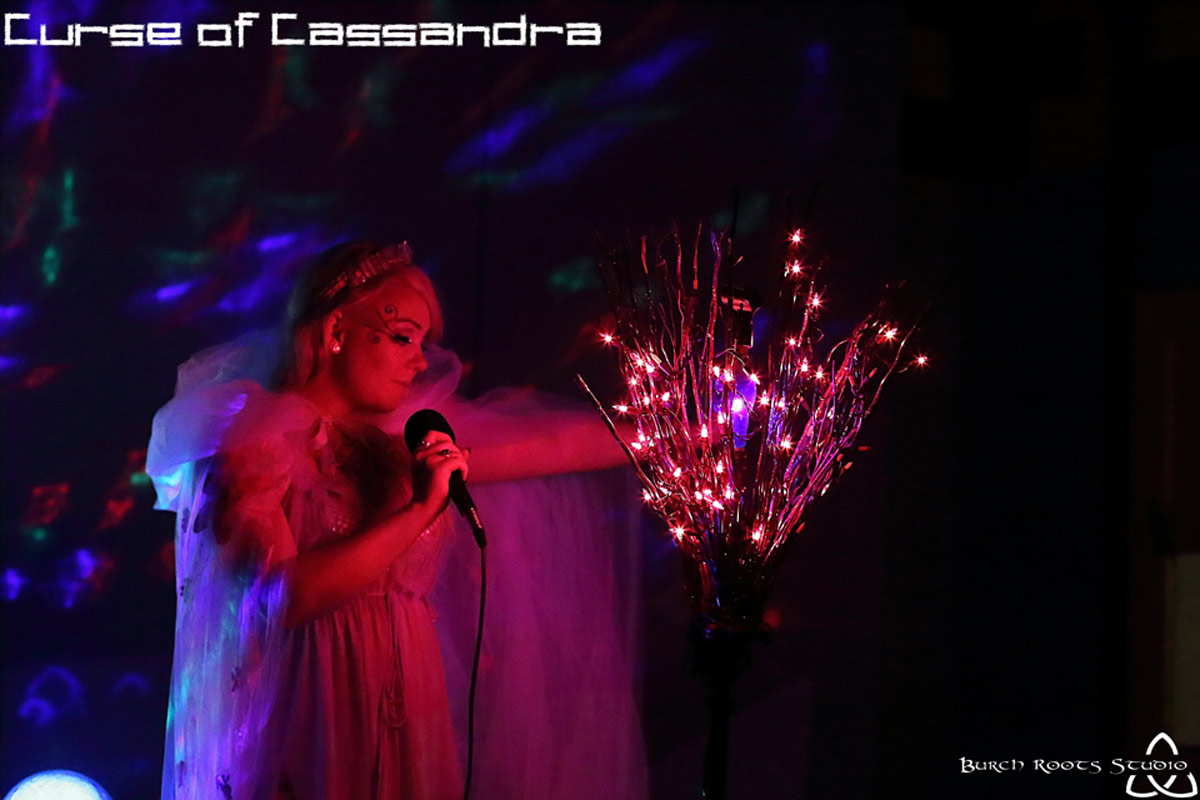 Our headliners, Curse of Cassandra,  took the stage to start off the first date of their latest tour and played an amazing set that had them presiding over all of the peoples of the forest! I really loved their expanded stage design and the new songs which I haven’t heard until now! 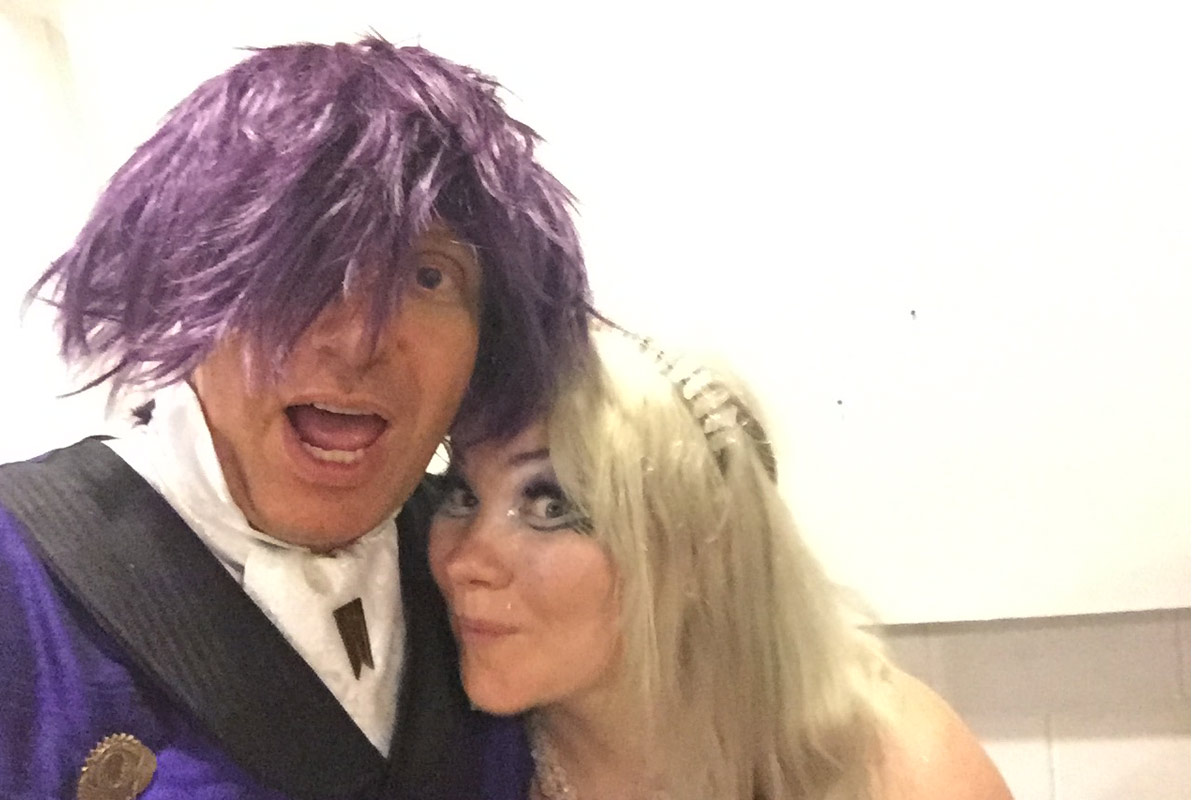 DJ Grog Hanging out with Electra Curse from Curse of Cassandra

To close out the night the purple haired DJ Grog started up some tunes that had many members of the remaining crowd dancing and entertained the ears of the vendors and performers as they loaded out. 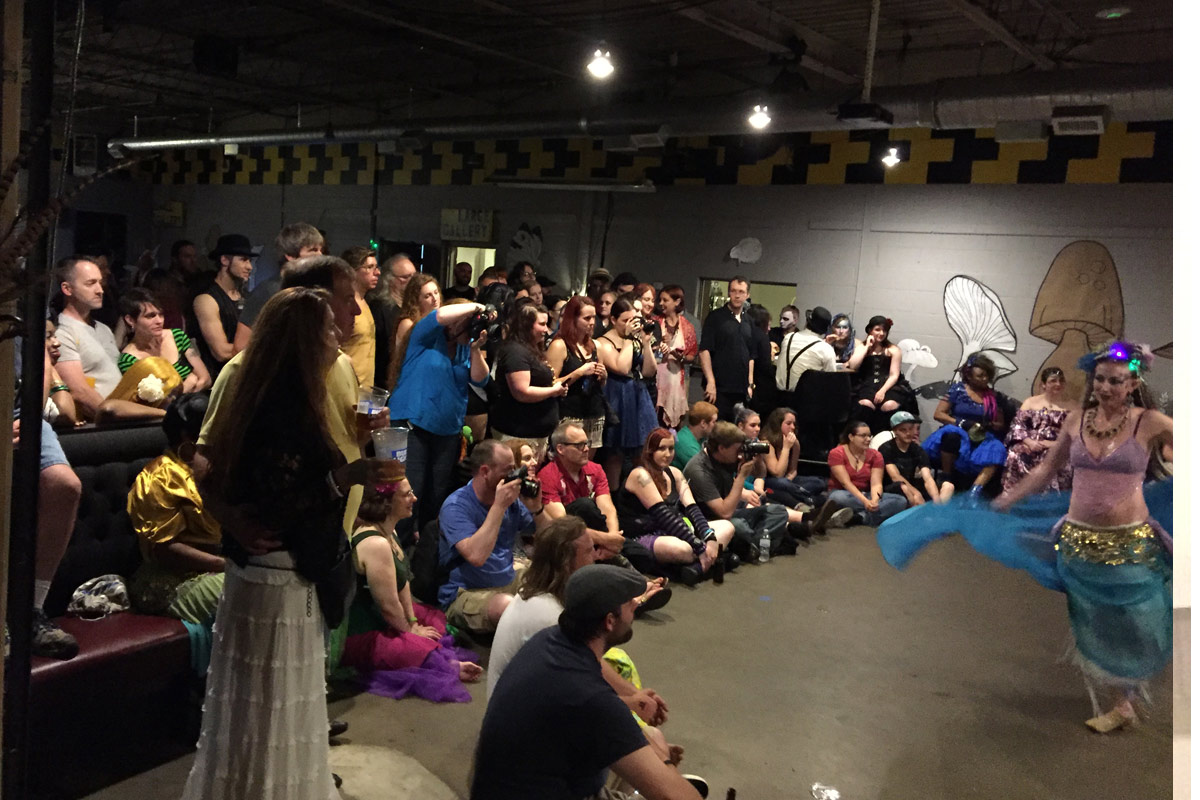 Once again thank you to all the entertainers, vendors, volunteers, crew and attendees who made this party such a success once more. I look forward to seeing all of you again sometime soon. If you’ve been thinking about coming to a Yellow Cabaret but haven’t made it, what is holding you back? Just let me know!