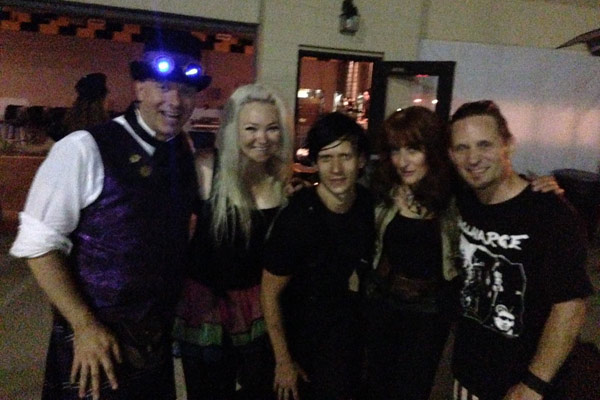 Ye Olde Yellow Cabaret VI was a very special show featuring steampunk greats Frenchy & the Punk from New York!  I have been a fan our theirs for several years and have seen them at several steampunk cons in the tri-state area so it was splendid to bring them to Dayton for a Yellow Cabaret! In honor of our guests we decided to make it a theme night of Viva la France, which many performers and guests took to heart dressing up in their own version of Frenchwear!

In a slight twist we had two food carts instead of a food truck. For peoples dining pleasure we had gourmet hot dogs from Bad Dog and then organic cotton candy from the Flying Santucci Brothers. As per usual just inside the entry way members of Airship Passepartout were greeting guests and catting their hands after they paid to enter by the wonderful door crew of Kitty Kim, Mike, Sabrina & Gintia! Also available in the lobby were Airship Passepartout Pins and high quality prints of event posters from all six of the Yellow Cabarets…plus post cards for the upcoming Yellow Cabaret VII!

Once inside the main room volunteers from Yellow Cab were severing drinks which consisted of Airship Passepartout favorites: Simply Ernest & The Captain’s Wench as well as two wines and four local microbrews from Toxic Brew , Warped Wing, Yellow Springs Brewery as well as pop & water. Extra special thanks to Rob Badger, Miss Mystic & Dayton.com who took photos of most of the show, you can find links to their amazing photos near the end of the article…and interspersed throughout! Plus you will also find video from Mike Kilbourne, Bree Orlock and the Ceiling Cam! 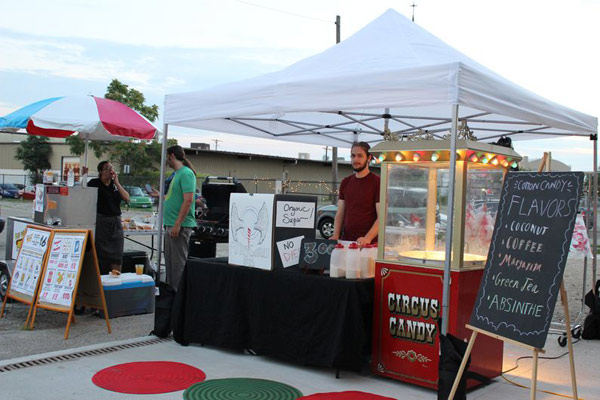 In the vendor room and outside there were many familiar faces, plus a few new ones selling goods from crafters based in Dayton, Cincinnati & Columbus! This time there were wares from Sylvan Creations, Free Pirates for Hire, Sew Late at Night, Marianne C. Jackson, Grandma’s Bane Crafts, Bree Orlock Designs, Rose & Gear, Pandora Society  and Jessica Spangler Digital Art 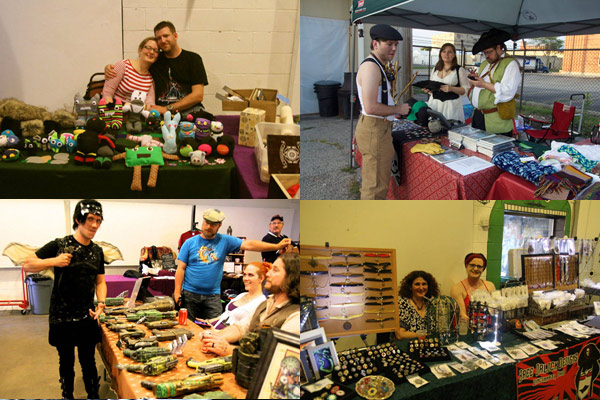 Just a few of the many great vendor tables!

The first act of the evening were the lovely and delightful three piece Blue Heron Trio from Dayton. This was their second time playing a Yellow Cabaret and once again the crowd loved their fabulous jazz / lounge sound, especially when they would play a song from the 80′s or 90′s done in their own unique style. 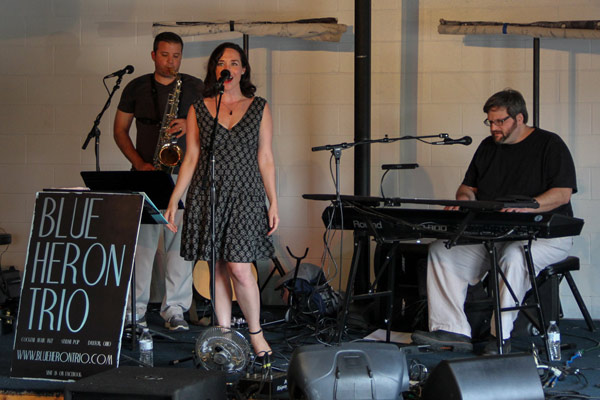 Next up were the lovely ladies of Troupe Roja Bellydance making their third appearance at a Yellow Cabaret. Keeping to the theme they worked out a few numbers with a fun French flair! They also had a few members with birthdays, which made the evening even more special! 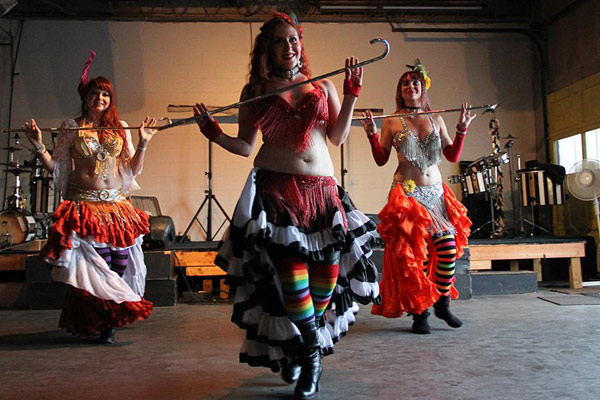 Carrying on with the French theme the two principal members of Blue Moon Circus took over the floor and amazed the crowd with their mix of skill, daredoing and freakishness! 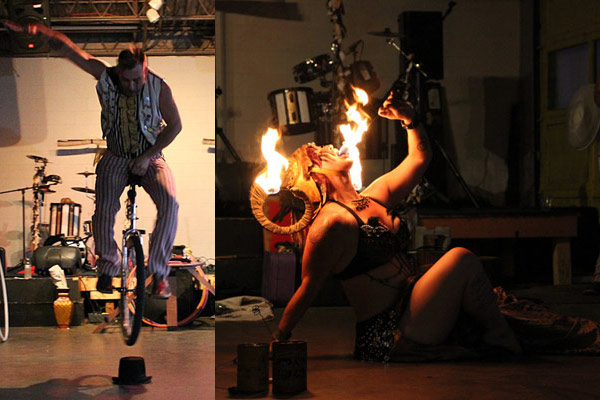 French and the Punk

As the sun set the highlight of the evening took the stage all the way from New York – Frenchy and the Punk! Scott & Samantha enthralled the crowd with their steampunk-folk-indie-rock and their charm.

Mike Kilbourne Video of Frenchy and the Punk 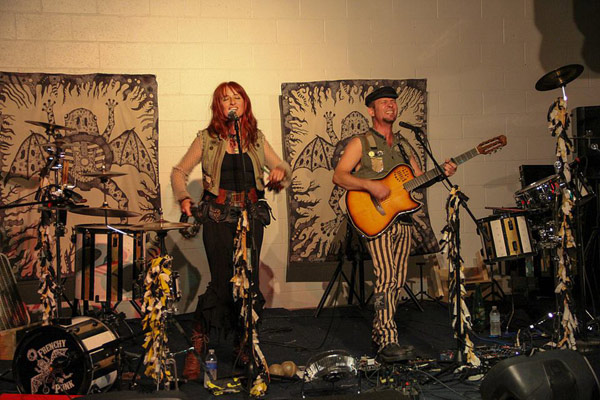 Frenchy and the Punk – New York

Soon everybody headed outside to the main parking lot to watch Yellow Cabaret regular DaShane Starfox work magic with fire. 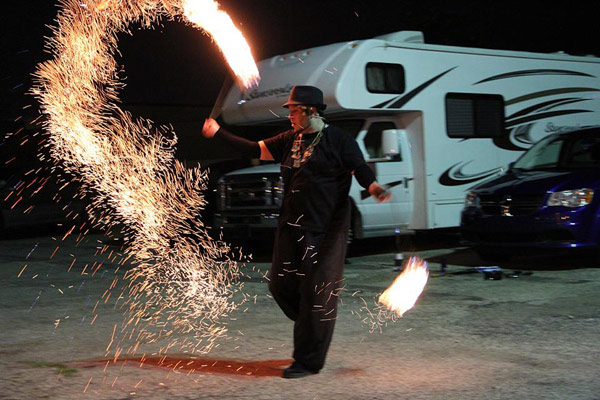 Returning to Yellow Cabaret for the third time Curse of Cassandra was just coming off of a month long tour of the Mid-West. Now a duo they have tightened things up even more and put on an amazing show of great goth / electronics with mesmerizing light effects. 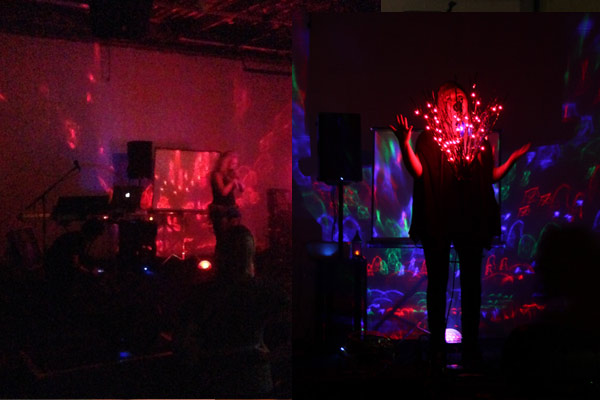 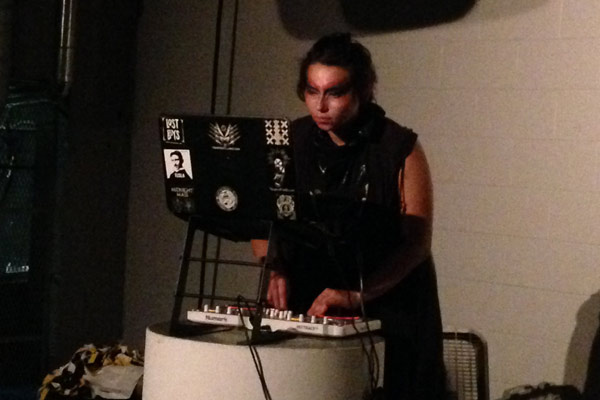 Photos by Rob Badger - Photos by Miss Mystic - Photos by Dayton.com - Video playlist from Yellow Cabaret VI - Bonus from Bree Not Quite Band of Pirates

A big thank you to everybody who performed, vended, volunteered and attended you made this Ye Olde Yellow Cabaret the best one yet! We hope to see you at the next ones…especially if you weren’t able to make it out to this one! - Sir Ernest Octave Suszczynski: Captain of the Airship Passepartout! 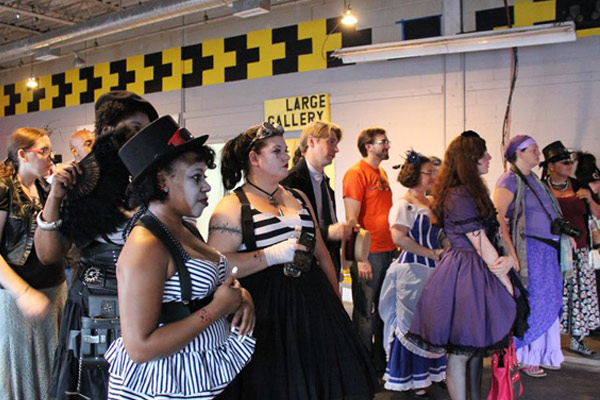 A bit of the lovely crowd!