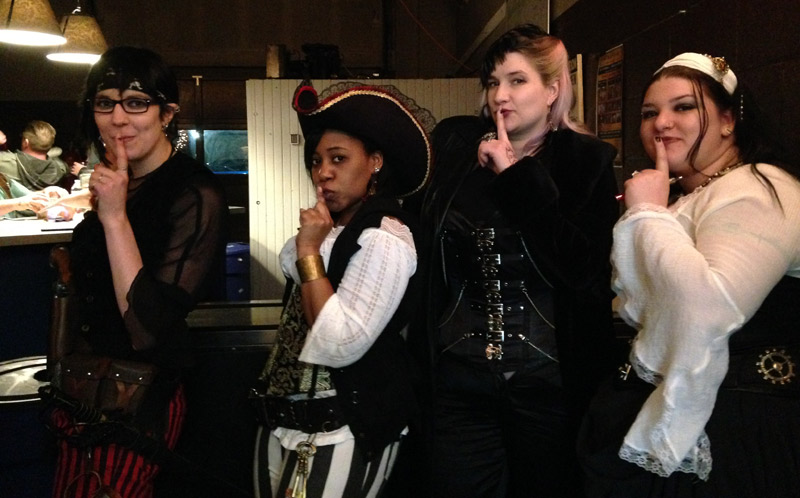 Ye Olde Yellow Cabaret IV was the first of 2015 and our first event themed as a pirate invasion. As a steampunk group Airship Passepartout loves to have fun and make sure that the punk stays in steampunk so what better than pirates! Since the event was in late March we hoped the weather would cooperate. While it didn’t rain it never did get above freezing, still spirits were not dampened and there was plenty of heat indoors. The show itself drew more people than ever with over 250 people attending including performers and vendors!

The event was set up similar to the last one with the food truck, this time Flower Power Wood Fired Pizza, being near the entrance just behind an outdoor seating area. The pizza was extremely popular and while there grew to be quite a wait, the end result was excellent. Just inside the entrance Loren Muzzy was reading tarot cards for guests and members of Airship Passepartout were greeting guests and catting their hands after they paid to enter. OK some were catted, others were Skull & Crossboned by the wonderful door crew of Kitty Kim, Mike, Sabrina, Tammy, Ray & Gintia! Also available in the lobby were Airship Passepartout Pins and high quality prints of event posters from all four of the Yellow Cabarets! 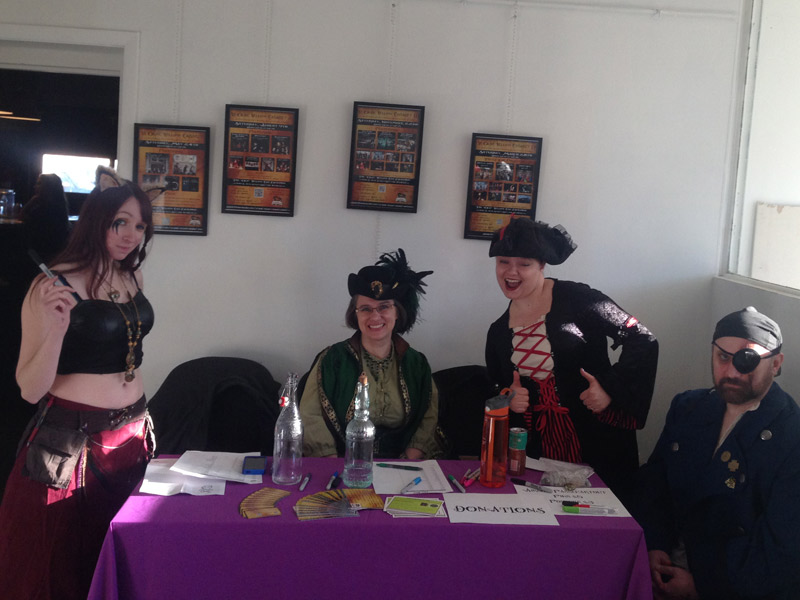 Some of the Airship Passepartout Crew working the Entry 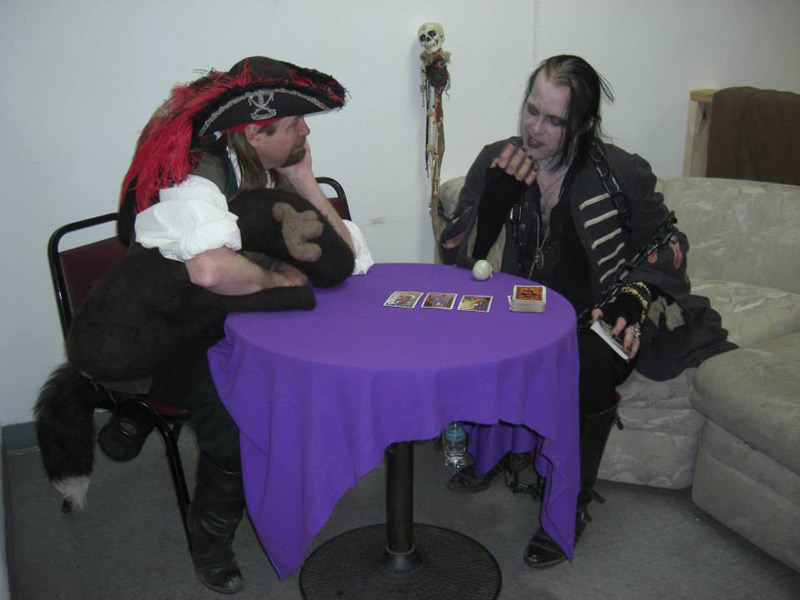 Once inside the main room volunteers from Yellow Cab were severing drinks which consisted of Airship Passepartout favorites: Simply Ernest & The Captain’s Wench as well as two wines and four local microbrews from Toxic Brew , Warped Wing, Yellow Springs Brewery as well as pop & water. 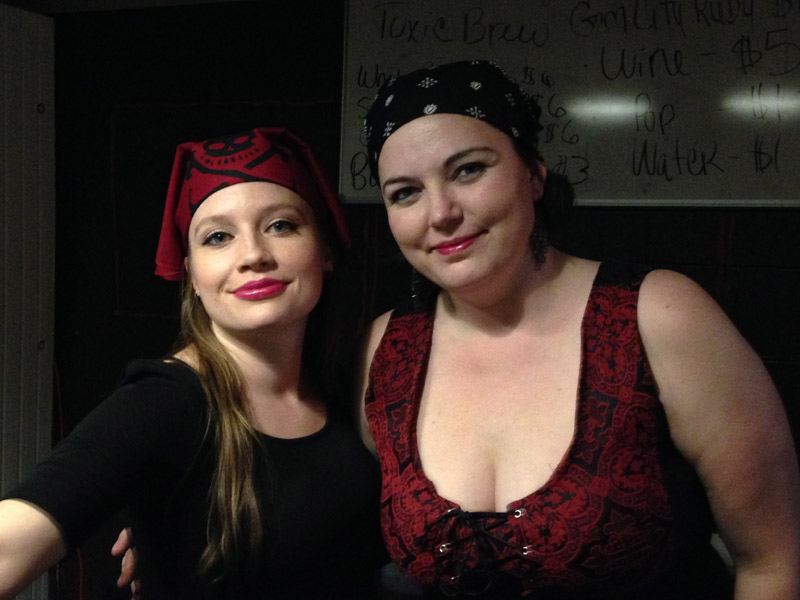 In the vendor room there was a great variety of goods from crafters based in Dayton, Cincinnati & Columbus plus a Henna Stand! This time there were wares from Sylvan Creations, Free Pirates for Hire, Studio de Sade, Sew Late at Night, Pandora Promotions, Marianne C. Jackson, Under the Eaves- Fine Art and Artifacts, Cultist Crafts, Purple Dragon Creations, Bree Orlock Designs & Henna by Zatanna 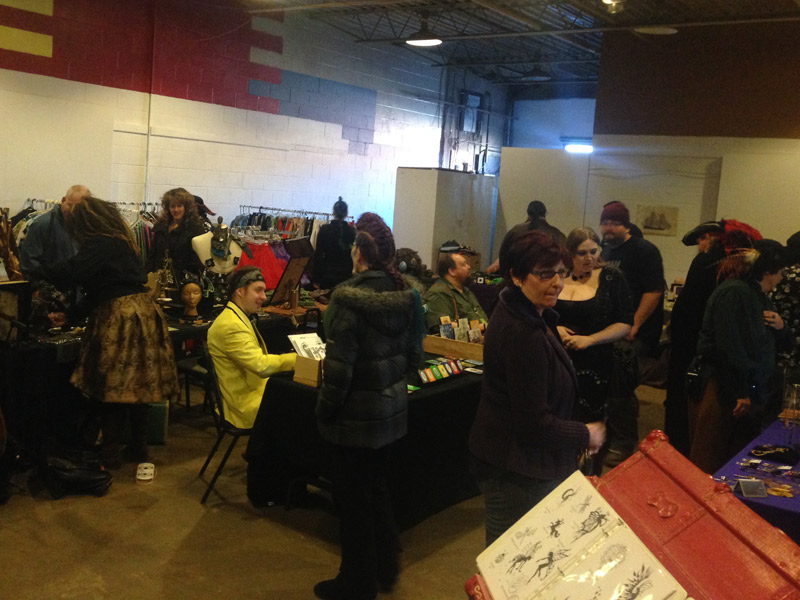 Part of the packed vendor room

At seven the entertainment started with the announcement of Blue Moon Circus from Louisville, KY. The four members from Blue Moon featured three newcomers to the Yellow Cabaret plus Octo Claw who has performed twice before! Performing both outdoors in the cold (due to fire displays) and indoors they treated us to: Bad Alice doing a variety of belly dancing,  Octo Claw as the ringmaster and various side show, Sirius Lee juggling and yo-yoing, plus Elizabeth Hallows eating fire and slinging knives! 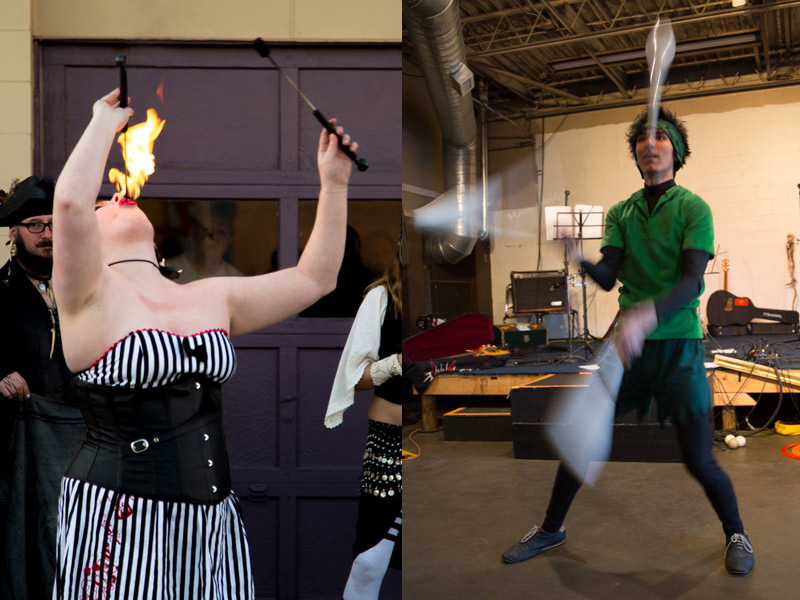 After a short break was the Dayton Debut of Cincinnati’s Band of Pirates. The five pirates took the stage with flair and entertained the crowd with their renditions of old sea chantys as well as their very own pirate versions of 80′s and 90′s songs! 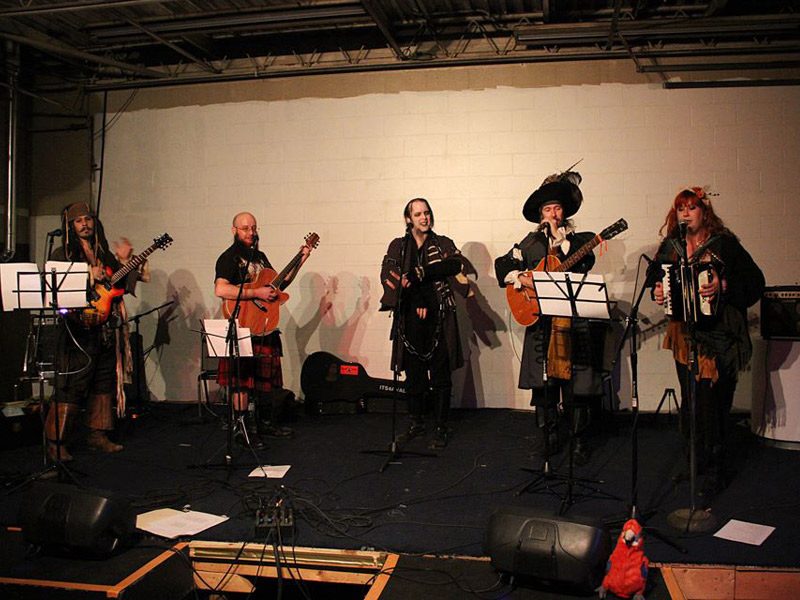 Band of Pirates from Cincinnati, OH – Photo by Rob Badger

Soon the crowd was directed outside to form a semi-circle around Dayton fire spinner Jimi Black who entertained & warmed the crowd up with his fire spinning skills! 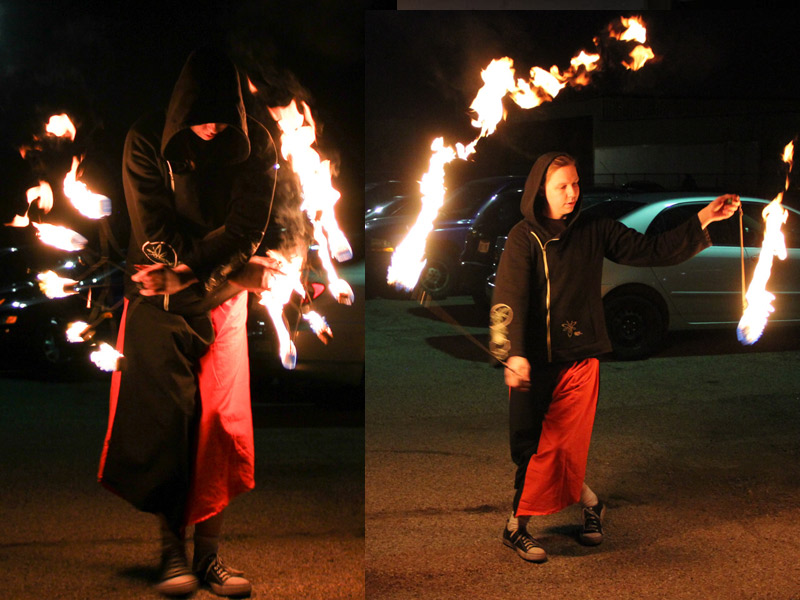 Gathered back inside Troupe Roja belly dance took the stage featuring the premier of their pirate story. Always a sight to behold the dancing, storyline and costumes were amazing! 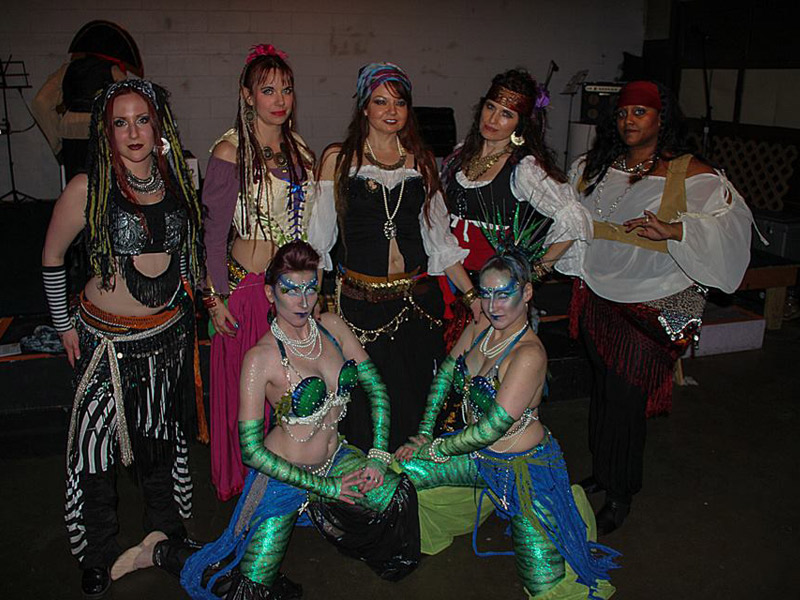 With the crowd good and warmed up from the belly dancing, Schatzi Lord took the stage to turn up the heat even more. Decked out in a pirate outfit her stage show told the story of a woman and her run ins with many famous pirates. The lovely Schatzi then proceeded to strip down in a very sensual burlesque performance! 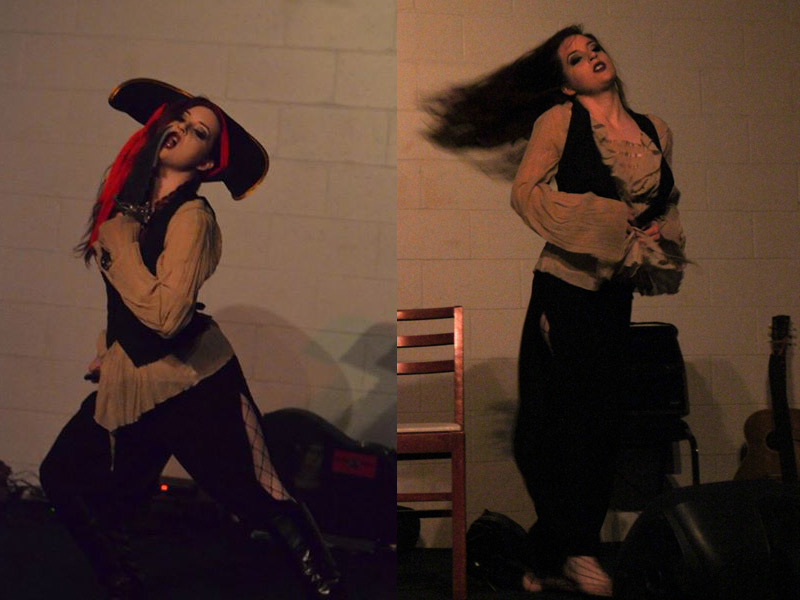 DJ V-Ral then took the stage to let people dance and rage a bit instead of just watching. 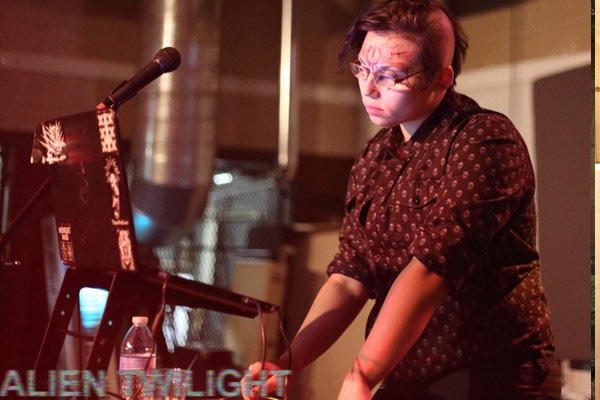 We then had a double header of amazing fire dancing as everybody headed outside to see Sunova Starshine. She brought along her friend Gabriel Ford as her fire safety and then proceeded to trade off songs with him. It was wonderful to compare and contrast their styles. 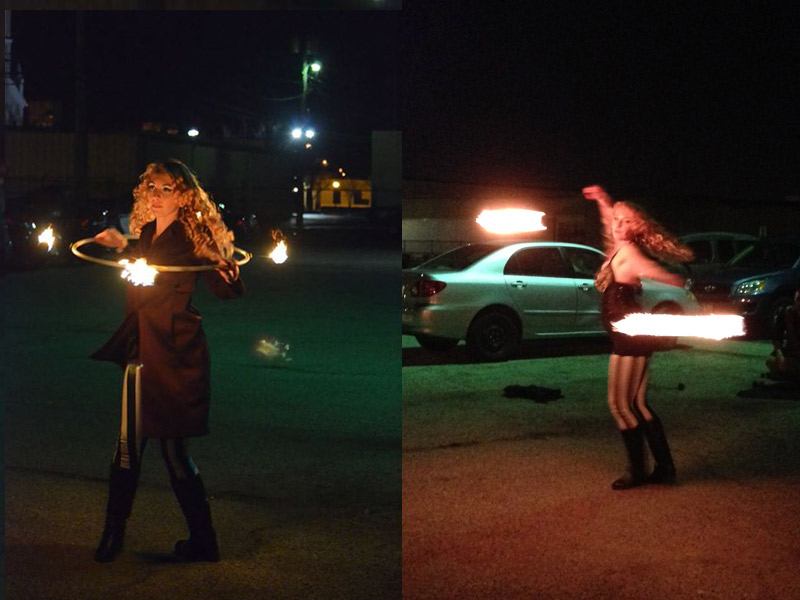 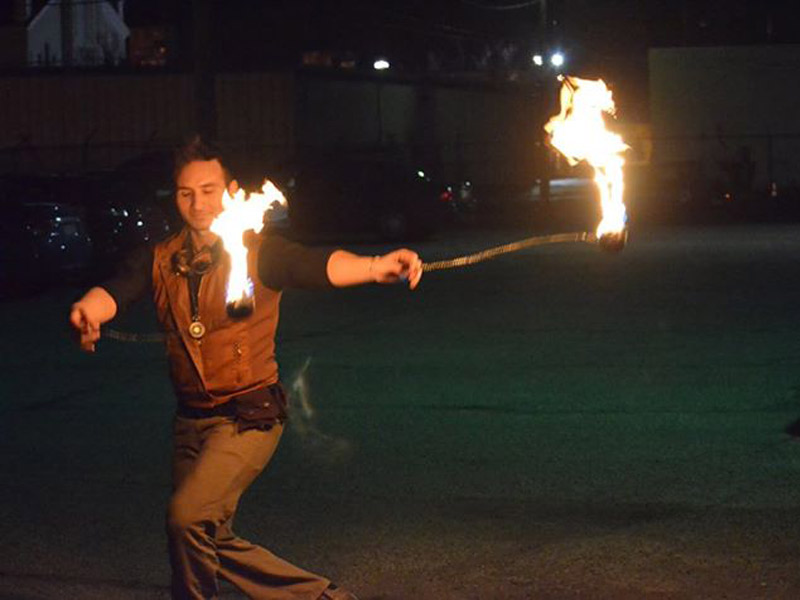 With the crowd already heated up Schatzi took to the stage again with her dazzling Lovecraftian inspired burlesque number! 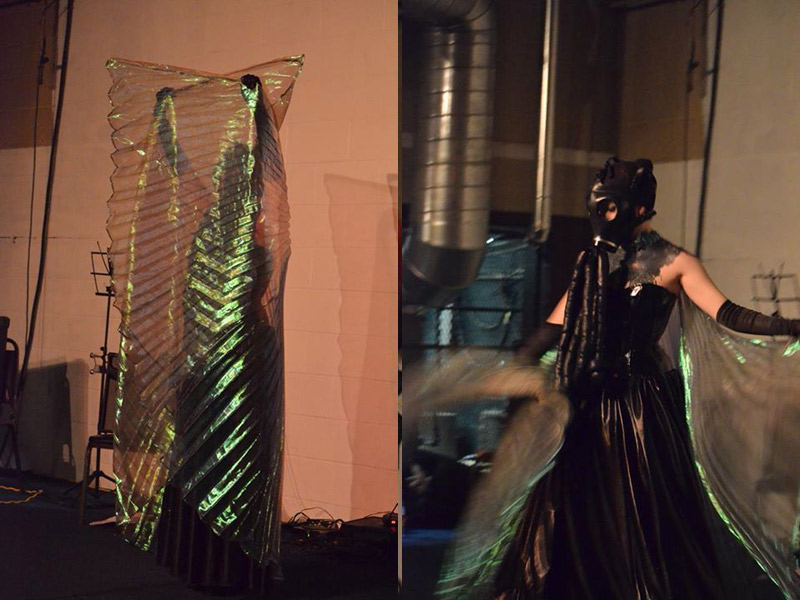 Close to Midnight two …wait Pirates took the stage: Drunk & Sailor! Needing no introduction they launched into all manner of Pirate, drinking & Celtic songs that had the crowd singing along. They even brought two ladies who had birthdays up on stage for a special song and convinced Jeff Opt the soundman to “Ring the Bell”! 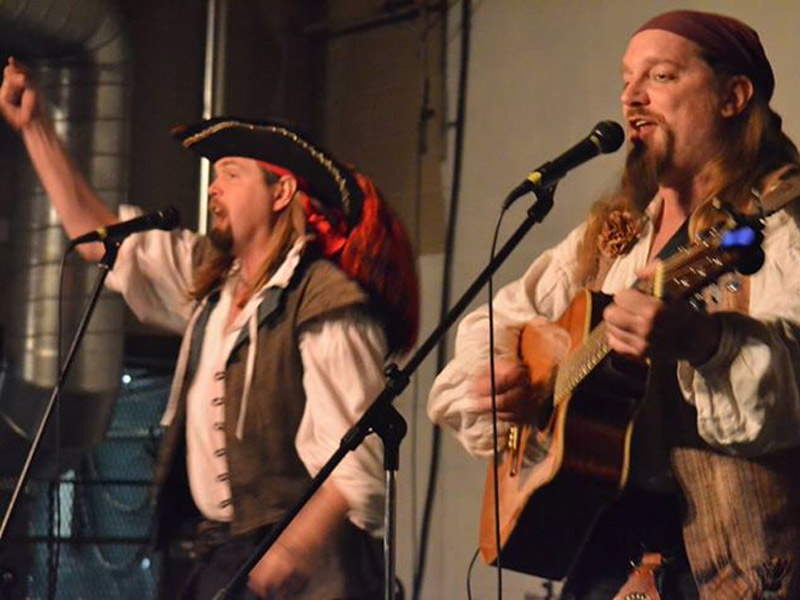 To close out the long, wonderful evening DJ V-Ral once again took the stage and proceeded to make everyone dance as they left and cleaned up!

A big thank you to everybody who performed, vended, volunteered and attended you made this Ye Olde Yellow Cabaret the best one yet! We hope to see you at the next ones…especially if you weren’t able to make it out to this one!
- Sir Ernest Octave Suszczynski: Captain of the Airship Passepartout!