The first Yellow Cabaret was so much fun we decided to do it again with a lot of new acts and some faces from the first one. Once again the weather was great and the space was better than ever. The two things that need to be done next time are:
1. A large group picture of everybody’s hand cats
2. Many photos of DJ V-Ral!
(See the bottom for various photo sets from the event!) 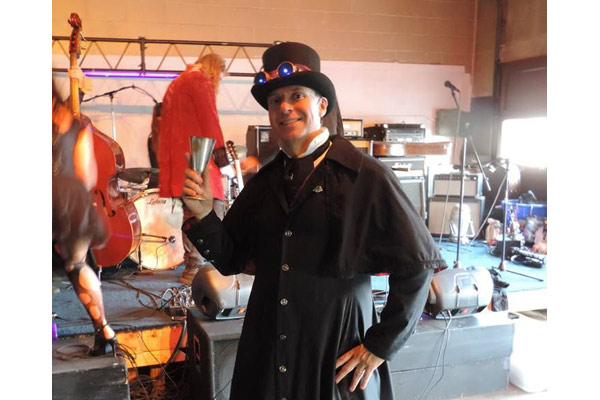 Your host Sir Ernest Octave Suszczynski Captain of the Airship Passepartout kept relatively sober the entire evening and introduced all the acts and kept the fun moving forward all night. 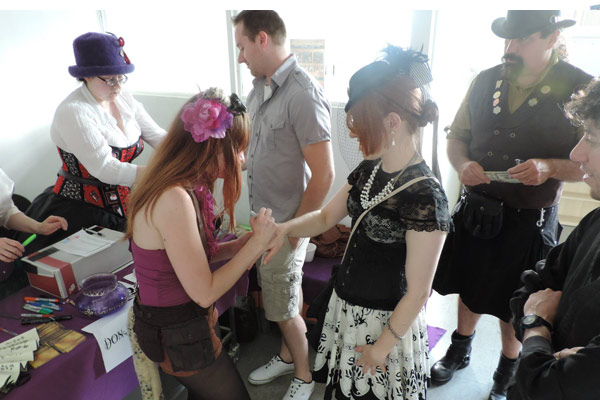 The night began for all of the guests by being catted by Kitty Kim and checking in or paying at the door to one of the Airship Passepartout members including Ivy, Dr. Gintia, Lady Mau, Nicole & Jacob. Kitty Kim did not bring any artwork to decorate the entry however she did create a piece of art on everybody’s hand. Note: Next time though we need to buy better markers so that the “drippies” don’t sweat off all the ink. 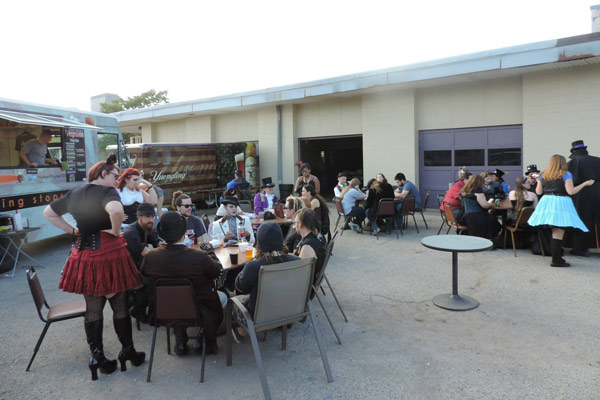 Outside in the fenced in lot was the local food truck Hunger Paynes who provided amazing croquettes and other delights while Yellow Cab served local craft beers from; Warped Wing, Toxic Brew, and Yellow Springs Brewery, plus wine and limited variety of three mixed drinks, as well as water and soda. There was enough variety to keep everybody satisfied and happy throughout the whole evening. 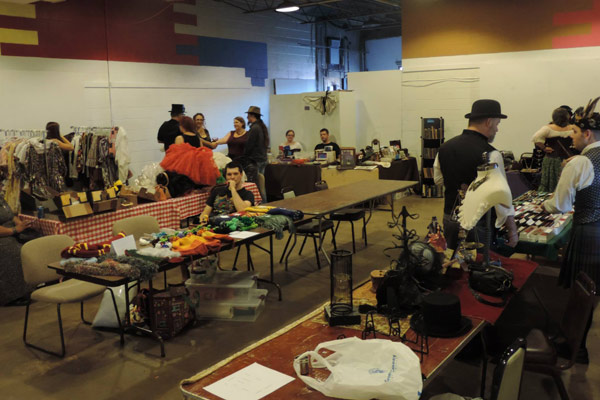 Like last time there was an indoor vendor room, which while warm did house many great craft vendors including: Sew Late at Night, Krafty Stuffs, Sylvan Creations, Jacobee, Ollivander’s Wands and Marianne C. Jackson plus releases from Ford Theatre Reunion and Vourteque! 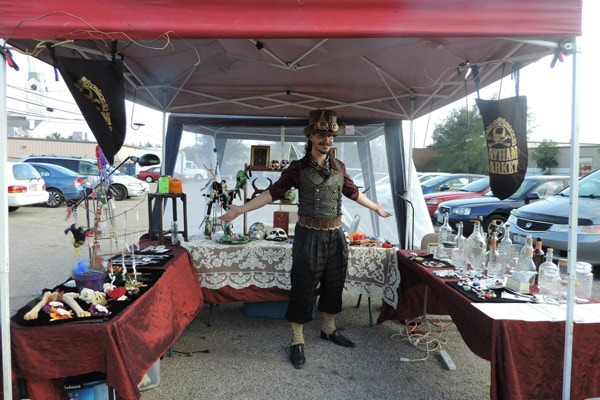 In addition two vendors set up tents outdoors to sell their wares including Mayham Market & Free Pirates for Hire! 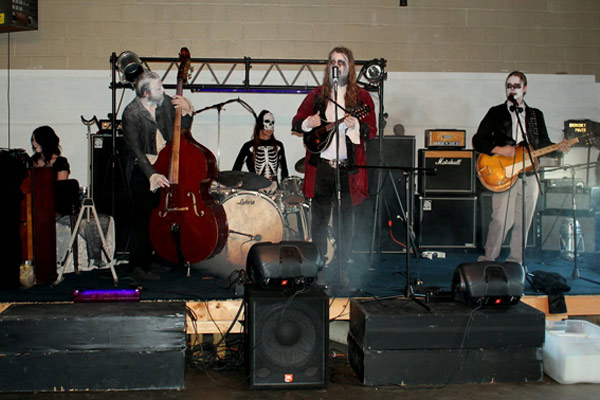 First up on stage were Skeletones, a shockabilly band from Dayton which got the crowd warmed up and moving with their rockabilly songs and macabre themes. 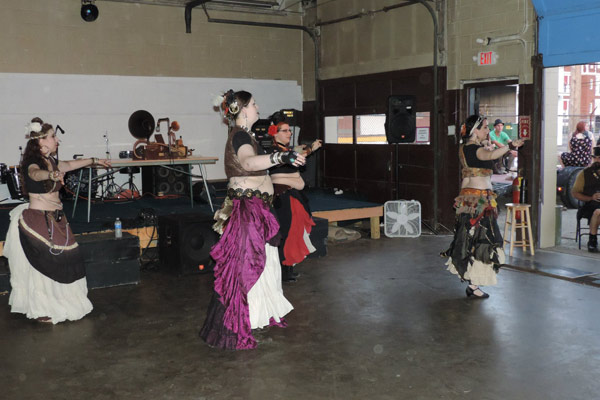 After a short break Les Odalisques Belly Dance Troupe took to the floor in front of the stage to bring their Orientalism through a steampunk lens style. Their unique style blends tribal fusion belly dance with a stylized steampunk aesthetic, incorporating well-researched elements from multiple eras and locations across the Middle East as well as classic steampunk tropes. A highlight of their set was when they grabbed members of the crowd to join them in their final song. Video 1, Video 2, Video 3, Video 4, Video 5, Video 6, Video 7 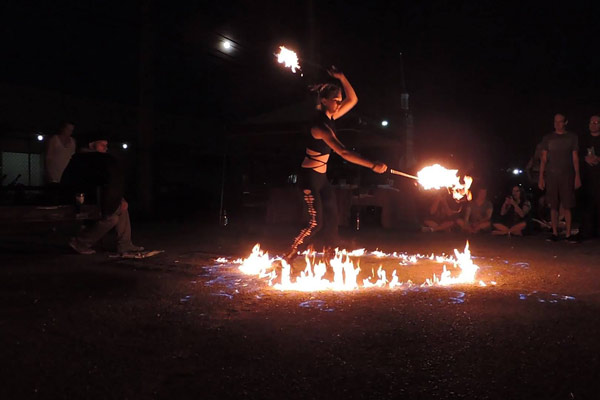 As the sun began to set the lovely Skye Amos of Yellow Springs drew the crowd outdoors to watch her spin fire and dance with the flames. 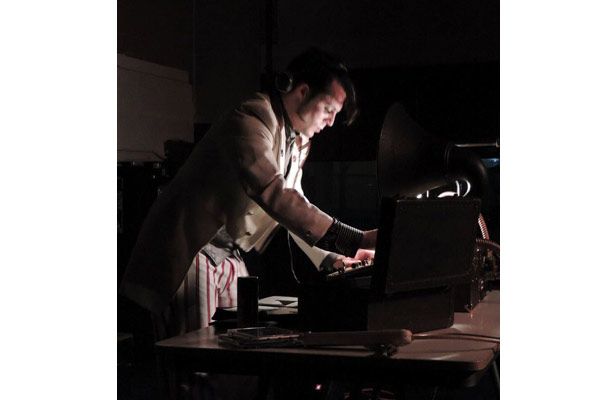 After things started heating up everybody hurried back inside to dance to the tunes being spun by the always dapper Vourteque from Chicago! He had most of the crowd on their feet throughout his whole set which included several of his own creations mixed in. 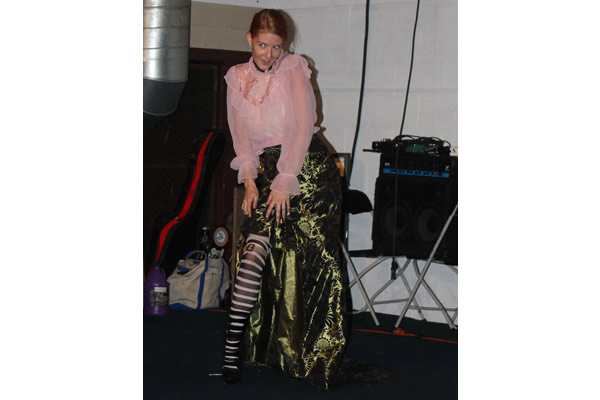 Then to turn the heat up another notch the delightful Laci Neal, all the way from Omaha, took the stage to perform a special burlesque number just for our audience. Dressed to the nines in an amazing Victorian outfit she had the crowd enthralled as she stripped down to the bare minimum. Then if that wasn’t enough after the next act she once again took the stage as a gender bending Captain Mal of Firefly to which at least one audience member  exclaimed “Now that’s not even fair!” as his wife consoled him. 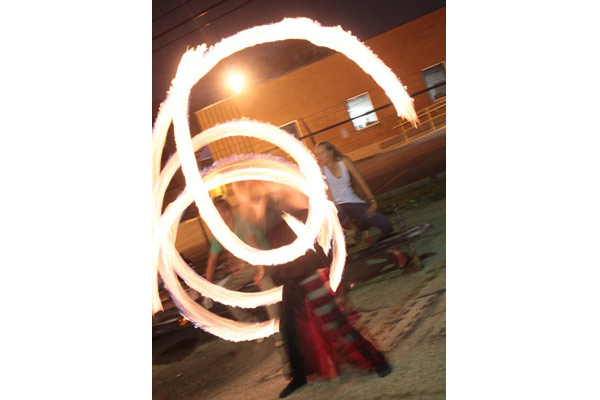 One of our two return performers from the first Yellow Cabaret, DaShane Starfox, keep the crowd pumped up with his amazing fire dancing skills and was even joined on one song by Skye Amos. 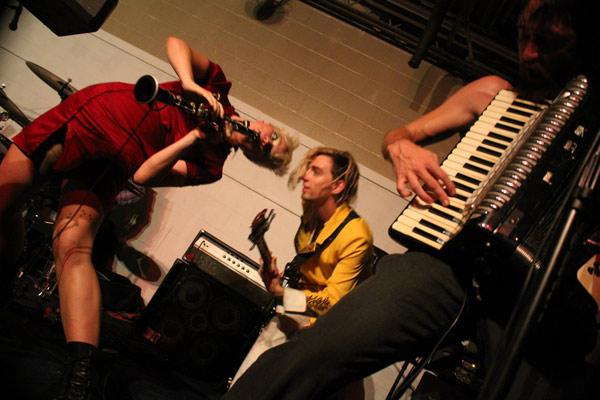 As the night started to reach a crescendo Ford Theatre Reunion from Lexington took the stage and  played an amazing set as always of brilliant circus, steampunk, indie, punk rawk goodness! One of the best frackin bands around and they just keep getting better!

Then to finish off the night DJ V-Ral took the stage to play her mix of electro-swing / goth / industrial / techno. People were all so busy dancing their assess off that nobody bothered to take any photos of her! 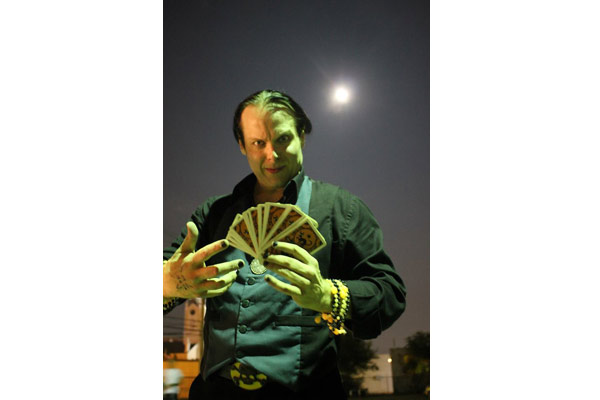 And of course I can’t forget to mention Loren Muzzy from Cincinnati who joined us to do tarot readings in his tent in the parking lot.

Finally thank all of you who came to the show and shared in the fun and enjoyment of all these wonderful performers and artists. We all look forward to seeing you at the third Yellow Cabaret on Saturday, November 22nd!