Report from the International Steampunk Symposium 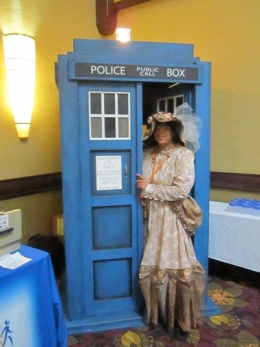 I, Lady Puffington-Smythe, correspondent extraordinaire and 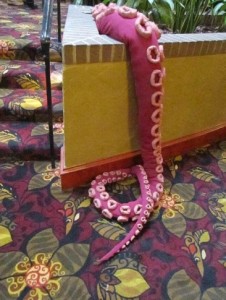 frequent passenger on Airship Passepartout, recently returned home from a remarkable journey.  Image, travelling around the world in less than 48 hours!

On Friday, the 24th of April, the crew and passengers of Passepartout, along with the crews and passengers of many other Airships from around the globe, were greeted by various and sundry dignitaries and were briefed about the objectives of the upcoming race.  That very evening, the race was underway and we were off to see the world.  During our journey we had time for a few stops: France, Italy, the Sahara, and Egypt. What a wondrous sojourn – the sights, scents and flavors of it all.

My experience at the International Steampunk Symposium.  I arrived on Friday 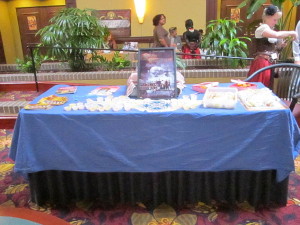 afternoon and after settling in, assisted with the set-up for the Tea Stroll, held in the upper terrace lobby.  Passepartout had been assigned to the country of Turkey.  The table was set with decorations and refreshments in the form of baklava (hand made a workshop at Gintia and Ernest’s home two days prior) and mock Turkish delight.  I, along with two passengers from Michigan, Vickie and the Major greeted travelers who stopped by.

Opening Ceremonies – The challenge was presented to the Airship captains: The winning ship would be determined by points awarded for various Symposium Games competitions:  Bocce Ball, Penny Farthing Races (tricycles), Umbrella Fencing, NERF Dueling, Tea Dueling, Costume & Moustache Contest, Dirigible Races and Twisted Skies Tournament (a Steampunk inspired card game).  The ship with the most points would be awarded a trophy.  The Symposium guests were introduced to the dapperly clad audience at this time.

After changing I, along with others assisted in moving furniture and setting up for the bacchanalia party, hosted by Passepartout.  The theme was Greece and togas were encouraged.   Absinthe was available as well as other adult beverages.  A separate room served non-alcoholic libations to guests.  This gathering was well attended and ran well into the next day (My room was along the party corridor, right around the corner from the Baker Suite aka party central).  There was a men’s legs competition and a ladies’ moustache competition. Both were received with enthusiasm. 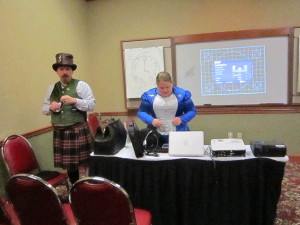 Saturday Morning – I chose to dress in my Western gown and hat before going to the hotel restaurant to dine.  I then started my volunteer assignment as a room monitor. My duties were to keep the presenters on time, to perform a head count, and to pass out and collect the session evaluation forms.  The two panels I saw were well researched and quite interesting.  How to Train Your Cosplay (creating your persona and giving depth to the part) and Navigation – How to Find Your Way Around the World. 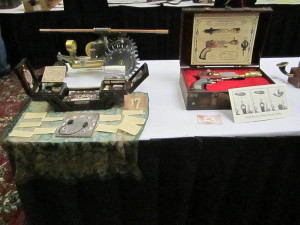 At noon, I wandered through the Merchant Bazaar, caught some of the Umbrella Fencing and visited the Curiosities Exhibit. Then I went to see Troupe Roja, a middle-eastern dance group from Dayton, OH.  I had seen this particular performance before at a cabaret earlier in the year.  It was just as entertaining to me a second go round.  Two dances, in particular, included Steampunk themes and costumes.

After receiving instruction in Ballroom Dancing to prepare for the evening’s ball, I attended the panel on Victorian Conduct Manual to Current Modes.  It was then time for Afternoon Tea.  Although the room decorations were intriguing and the sweets offered, beautiful and delicious, the menu did not live up to my expectations for a four o’clock tea.  I left, still feeling a bit peckish; thus, my next stop was a nearby restaurant to purchase supper.  After eating and a short rest, I changed into my black ballroom attire. 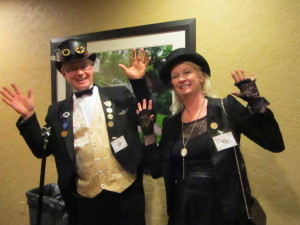 At 8pm, I attended the panel entitled the Theory of Mixology, and learned more about the science and art of mixing alcoholic beverages.  From there, it was on to the Symposium Ball, hosted by DJ Doctor Q.  Sir Reginald Pikedevant, Esquire, performed several pieces for our amusement.  After leaving the dance, I investigated the room party, hosted by three ships – Corsair Iniquitous, Ace of Spades and HMRAS Valkyrie.  The theme was Tahitian, I do believe, because each person who entered the room got leid (that is to say, had a wreath of flowers placed around his or her neck).  Again, a lengthy evening of revelry occurred.

Sunday morning necessitated packing up and loading my vehicle before heading out to dine.  I sat in on the panel Before Star Trek Science Fiction on the Small Screen and received a history lesson. I was then able to participate in part of the session: Belly Dance Basics with Les Odalisques.  (Les Odalisques is dance troupe from the Cleveland area).  From there, I attended the Symposium Feed Back Session with Aloysius Fox.  I shared my concerns and suggestions and heard those of others.  Fox also informed those of us present of his plans for the next Symposium and also for the next Pandoracon, to be held in 2016. 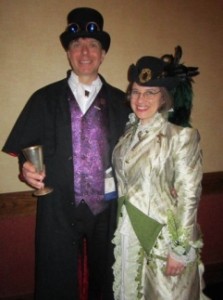 After the feedback session, I was able to see Les Odalisques perform on the upper terrace.  An auction, sponsored by NAMI, the National Association for Mental Illness. had been going on all weekend.  I had purchased several tickets so I felt compelled to go to the drawing.  My name was drawn three times for items.  After shopping at the Bizarre, it was time for Closing Ceremonies.

It was here that a duel for the trophy was witnessed.  The winning team – the first to make it around the world – Team Kraken!